There are times when writing ideas pop into your head willy-nilly, without being beckoned or called, and they seemingly write themselves in your brain before you even sit down to type. But then there are other ideas that seem to bubble and simmer beneath the surface for ages before they shape themselves into words. These are the things I hesitate to write about, deeper things, because I am still trying to formulate convictions about them.

So when that happens, they will simply have to simmer for yet a while longer. And you get the more light-hearted posts like this one.

I got terribly distracted on Saturday afternoon. I had a deadline for a group project due at midnight, and I was the one responsible for the final revisions to the project with the rest of the group getting their work to me at 8 PM. At 2:00 PM I wasn’t even started with my part of the project. But I kept on getting distracted, and oh, so sleepy.

So, I decided to fix my sleepiness with a cha kiaow yen fix. “Cha Kiow” in Thai means green tea. Green tea lattes are a cheap commodity here, with good ones easily bought along the street for about a dollar. Green tea has amazing healthy properties and are  rather addicting, and I find myself drinking one almost daily. While they contain some caffeine, it is less than that of coffee and gives me energy without making my hands shake. To cut down on expenses, as well as make them a wee bit healthier than what you find on the street, I went on a mission last spring to find out what goes into those green drinks and how to do it yourself.

I was rather surprised at the ingredients of a cha kiaow drink. Gigantic amounts of sugar go into them, which explains why I have found only a few select places that I can get the drink “unsweet” enough to suit me. I toyed around with the recipe until I found out what suited my taste buds and my conscience. Below is the result.

Here’s what you need. 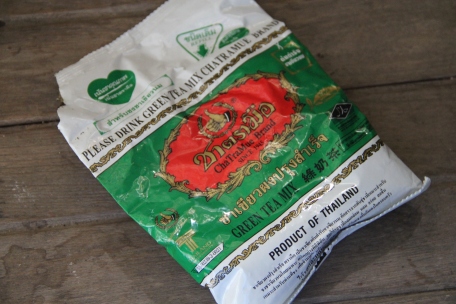 1.5 tsp of creamer melted in a small amount of hot water

Around .25 cup of evaporated milk (more or less) 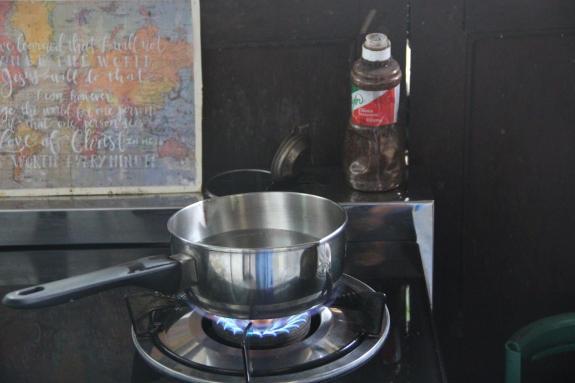 Steep the tea leaves in the water for at least 3 minutes (I often do longer). 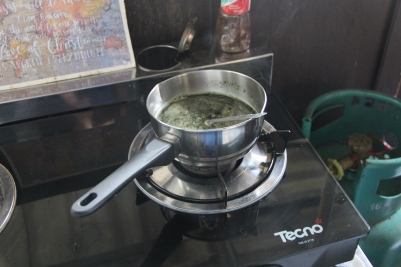 Strain the water and pitch the old leaves.

Mix the small amount of hot water with the creamer and add the sweetened condensed milk first and then the evaporated milk.

Pour the milk mixture into the tea.Watch the poetry of the colors mixing.

Froth the milk (if possible) and pour it on top. 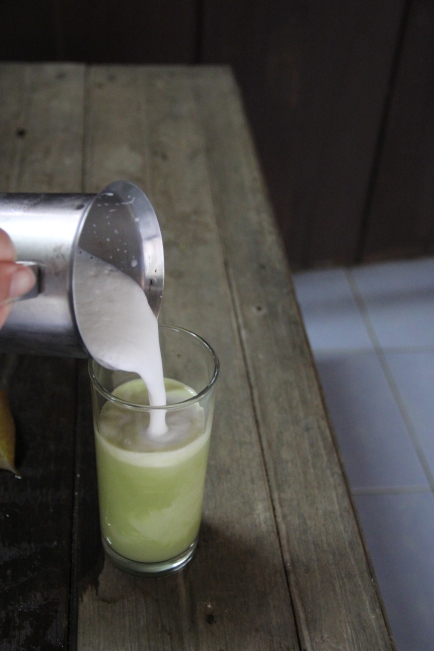 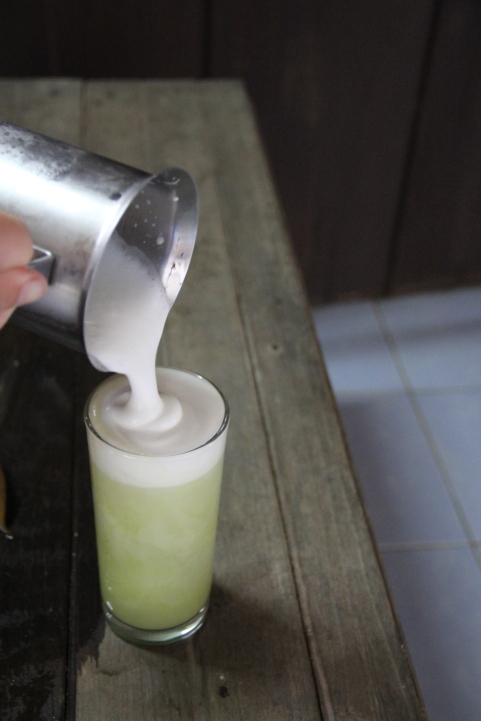 Add ice if you want some. I tend to be quite jealous of my green tea and don’t want to give any room for ice and the result of its melting, so I like to cool my tea or even partially freeze it before mixing it together.

You can change up these drinks to suit your taste. I have made them with ice, without ice, with cream instead of evaporated milk, etc. Cream is harder to get here, so hence the Thai substitute of canned evaporated milk.

Not too long ago, I realized that part of what makes the tea such a lovely green is additives and coloring. So much for being healthy. I still drink it, but sometime I do want to experiment with a loose leaf green tea of a higher quality. Especially for those without the Cha Tra Mue brand available, that would be something to try.

I’ve started to reuse the plastic cups and caps and straws that the bought drinks come in. This is very handy and saves on money as well. 🙂

After my cha kiow making, I finally went back to work. It really did help, by the way.

*thanks to Melissa for letting me borrow her camera again.

Words of Light: Grace & Truth for Your Journey Home

My travelogue, geographical and otherwise.

Drips of inspiration from a leaky pen

My Journey To Discovering A More Meaningful Life

where love of words, creativity, and Jesus meet

composing a life symphony for the Father

My Thoughts From Afar |

one perspective on life at home and abroad

One Fortnight at Yarmouth

Join me as I "David Copperfield" through life.

Taste and see that He is good

...of many different peoples and worlds.

living Jesus to the vulnerable of Tanzania

Living in the Now

A little bit of everything

no coward soul is mine

Life from my perspective, in Photography and Words.

on living expansively, honestly and hopefully