Tonight is the night. Christmas will never be the same.
This is how a normal practice goes with a 2-4 year old cast for the Nativity scene. Once we get everybody quiet or at least a resemblance of silence, the story starts and the angel comes to see Mary, who is sweeping the floor with great vigor. The angel appears and Mary, in an effort to look startled according to the coaching of the teachers, stomps on her broom, trips over it, straddles it like a witch, and performs all sorts of un-Mary-like broom tricks.  After the angel is finished, Mary is hustled off to another room and Joseph comes to dream, folds his blanket in fourths and proceeds to try to go to sleep on a tiny bit of blanket. While the angel speaks with him, Mary peeks out of the room with great giggles, as if pleased and embarrassed by the developments of Joseph’s dream. Once Mary and Joseph are supposed to go travel to Bethlehem, Mary is found chasing Joseph around with a broom, while Joseph fends her off with the blanket. The donkey takes them to Bethlehem while a pregnant Mary hangs on to his side and Joseph trudges way in the back as if reluctant to face what is going to happen next. When finally they reach the stable, Mary tumbles into her chair in a decidedly unpregnant fashion and dramatically pulls out from under her shirt, a sweater that has been knotted at the hood to represent a baby. While the angel appears to the shepherds (who are too busy talking and/or playing air guitar with the sash of their shepherd costume to notice that an angel has appeared at all) Mary is busy bopping the baby’s “head” against her own, and Joseph is out of his seat checking out what is under it. The Wise Men appear, following a star, and get distracted in their journey and begin waving to the rest of the children who are sitting not so quietly watching. After the Wise Men are coerced to kneel down at the side of the baby, and Mary yanks the gifts from their hands, Joseph decides now would be a good time to try out the flavor of the frankincense. 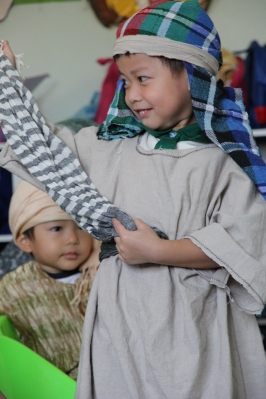 After this, everybody is put in a line in a haphazard fashion and we manage to sing, “It’s a Gift to You.” The first part is usually fairly quiet since most of them are busy poking their neighbor, or or are covering their eyes, or doing other mad sort of tricks. The last part of the song crescendos into a thundering roar, as each child tries to outsing   outshout the others.
If we keep on at this rate, we will be vying for Oscars alongside The Best Christmas Pageant Ever. Which is fine, too.
Just one more day….!

1 thought on “The Best Christmas Pageant Ever”

Words of Light: Grace & Truth for Your Journey Home

My travelogue, geographical and otherwise.

Drips of inspiration from a leaky pen

My Journey To Discovering A More Meaningful Life

where love of words, creativity, and Jesus meet

composing a life symphony for the Father

My Thoughts From Afar |

one perspective on life at home and abroad

One Fortnight at Yarmouth

Join me as I "David Copperfield" through life.

Taste and see that He is good

...of many different peoples and worlds.

living Jesus to the vulnerable of Tanzania

Living in the Now

A little bit of everything

no coward soul is mine

Life from my perspective, in Photography and Words.

on living expansively, honestly and hopefully