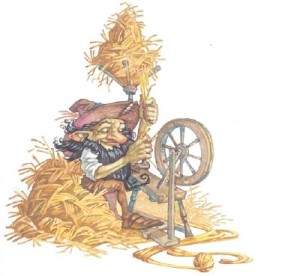 Many of us know the story of Rumpelstiltskin and of the girl who was taken by the king and forced to spin straw into gold. It has a happy ending. But what we don’t know is that the story of the princess and Rumpelstiltskin is still lived out in thousands of places in the modern world. Here is a retelling of the story.

Once upon a time, in a faraway kingdom where jungles grew thick and green in the hills, and mountain-fed streams roamed wild and bold down rocky slopes where elephants and tigers ran free, there lived a girl whose name was Ruthai.

Ruthai lived with her family in the mountain villages, and she was more beautiful than the full moon on a midsummer night, or the brilliant splash of waves on rocks in the midday sun. Her raven tresses fell thick and long to her waist, and her eyes were as large and lustrous as the starry Eastern sky on a lonely night. She ran as wild as the elephants and tigers on the jungle slopes of her mountain home and swung with the monkeys on vines that hung like canopies over the entire forest and swam with the fish in the crystal waters of mountain streams. Yet though she was as wild as the hills, her heart was good and pure and strong and she loved her mother and father as much as she loved her animal friends.

But as in all fairy tales there must be a pain and a rending  and an end to all of that childhood joy, and one day  Ruthai’s father fell into hard times. The time came when creditors came from the city, demanding payment for loans he had taken. There was nothing he could do. The only thing left was to sell his house, leaving his family destitute and alone on the hillside.

When the creditors left, with the warning that they would return in three days for the money, Ruthai crept to her father’s side.

“You cannot do this, father! You and I can survive on the mountains, but not Mother and the 2 babies! They will die when the cool season comes! Listen, I know what must be done!”

And so it came to past that when the creditors returned, Ruthai left her beloved mountains and travelled with them to the city to work for them and redeem her father.

But the creditors were cruel and heartless, and the little gold Ruthai was able to make while spinning cloth in the looms of the factory was not enough to satisfy them.

“We need more!” They shouted. “What little you’re making is hardly enough to support yourself, much less pay off the debts of your father!”

Ruthai began to eat less so she could give more money to the creditors and she pawned all she owned, but it still wasn’t enough to satisfy them.

“You lazy good for nothing girl!” They yelled when she brought them her week’s wages.  “Spinning cloth will never pay for your father’s debts! What kind of girl are you who is not even able to provide for her family? If you don’t bring in triple this amount next time, we will take away your father’s house and your family will live like animals on the mountainside!”

Ruthai went home brokenhearted. She threw herself on the bed and sobbed herself to sleep. She would never be able to bring them the money, even if she starved herself to death.

As Ruthai slept that night, she awoke suddenly when a figure dressed in gay clothing came gliding into the room. She caught her breath at the sight and sat up quickly.

“Who are you? Who are you?” she asked, pulling her bedclothes around her neck in fear.

Moonlight broke through a patch of clouds and light spilled into the room, illuminating the dark face of the figure. It was a man, his features sharp, his tight lips pulled into a benign smile.

“Me? My name is Rumpelstiltskin,” he replied.

“Why are you here?” Ruthai asked still trembling.

“I am here because you are in trouble.”

“What does that matter to you?”

“It matters because I care when people are in trouble and there is nothing they can do.”

“But… but there is nothing you can do to help me! I’ve sold everything I own to give money to the creditors and I have nothing else, nothing else to give!”

The man smiled down at her and raised his eyebrows in question. His voice dropped to a whisper. “Are you quite so sure that you have nothing else to give?”

Ruthai shook her head, half sobbing again. “I am sure. I have nothing else to sell.”

The man’s eyes grew deeper and more sinister as he came closer and looked Ruthai deep in the eyes. “No, you have not sold all you own. I will show you how you can spin gold enough and more for those your father owes.”

“Spin gold? But how can I? There is no way to spin gold, and I have no spinning wheel to spin with in the first place. I have sold all I have.”

And so it happened that every night in her room, Ruthai spun her body into gold for the creditors and redeemed her father from his debt, while she became more and more imprisoned every day.

Every fairy tale has a happy ending. But will hers?

Tell your friends and your neighbors and your church what is happening all across the world, when women are forced to spin their bodies into gold.

Pray for these women, especially the women of Asia, who because of cultural traditions are vulnerable and at high risk for trafficking.

Pray for the men who buy the gold.

And pray for the children who are lost because of the making of that gold.

The Beauty in Existence

Life from my perspective in photography, poetry, art, and words.

a canvas for wonderings, thinkings, and discoveries

cambodianchroniclesdotcom.wordpress.com/
My Alabaster Jar... {Living a poured out life}

Life in the Shoe

of a woman learning to live